No Result
View All Result

Fraudulent claims of indigeneity: Indigenous nations are the identity experts

by Molly Dinma
in News 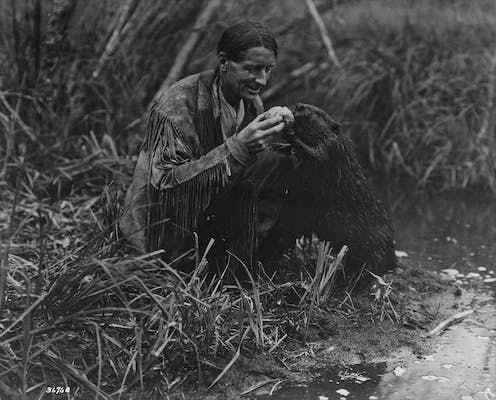 Grey Owl was an original 'pretendian,' portraying himself as the the son of a Scottish man and Apache woman after moving to Canada in the early 1900s. (Canadian National Railways/Library and Archives Canada, e010861684), CC BY-SA

There is a growing movement to identify and call-out people who have fraudulently held positions by claiming indigeneity like Cheyanne Turions, Joseph Boyden, Michelle Latimer and Carrie Bourassa.

The fraudulent claims of indigeneity are so widespread that the term “pretendians” has become part of regular vocabulary.

On the surface, this seems to align with the interests of Indigenous Peoples, but with the call-outs come underlying components of colonialism. Namely, that Indigenous nations are not being recognized as the authorities when determining indigeneity.

Genealogy as the only factor

Instead, people like non-Indigenous genealogists are being held out as “experts” on what does or doesn’t make a person Indigenous.

The result of having genealogy as the only factor is that the dialogue is not centred on Indigenous people as socio-political groups, but racial purity which perpetuates colonial stereotypes of Indigenous identity.

Understanding what makes a person Indigenous is complex. There are the obvious sources of indigeneity, such as kinship and receiving cultural teachings from Elders and knowledge keepers, that are established at birth and strengthen throughout a person’s life.

Other customs and traditions include adoption of non-Indigenous people by Indigenous families. Adoption is a long-recognized practice across many nations that has resulted the adoptees learning the language, cultural teachings and values necessary to be a part of that nation.

Whether an adoption is valid is an issue for the nation into which the person has been adopted in to decide.

There are also examples of communities who have granted non-Indigenous people full membership, based on criteria that the First Nation has established. Fort Williams First Nation in Ontario made Damien Lee a full member, which means he is entitled to vote in elections, run for office and to benefits provided by the First Nation.

He grew up on reserve, and while he is non-Indigenous and therefore does not have status according to the Indian Act, the First Nation has exercised its legal jurisdiction over identity and recognized him as a member.

The critical question at the heart of this issue is how to distinguish between fraudulent claims and legitimate ones. The answer lies with the nations.

Jurisdiction as a human right

As self-governing nations with constitutionally recognized Aboriginal rights, Indigenous people should be the only authority when determining who is part of their nations. It should be based on their own criteria, as it was before the imposition of the Indian Act. And nations should have the jurisdiction to enforce the laws they develop.

With that in mind, Article 33.1 of the United Nations Declaration on the Rights of Indigenous Peoples (UNDRIP) recognizes that “Indigenous peoples have the right to determine their own identity or membership in accordance with their own customs and traditions.”

Now that Canada has passed legislation setting out a framework for implementing UNDRIP, Indigenous nations need to be recognized as the authority for determining who is Indigenous. UNDRIP does not automatically remove Canadian authority over identity, so the government will need to take action to ensure existing legislation recognizes Indigenous jurisdiction in this area.

Both the Canadian government and non-Indigenous experts need to relinquish the authority they have assumed. A failure to do so will continue the discrimination and systemic violence faced by Indigenous people.

A copy of the Indian Act burns.
THE CANADIAN PRESS/Darryl Dyck

Since Confederation, Canada’s assimilative policies have actively worked to strip Indigenous Peoples of their identity and deny Indigenous jurisdiction.

The federal government has dictated who is an “Indian” through the status definition in the Indian Act and recognizes “the Indian Registrar [as] the only authority under the Indian Act who can determine a person’s eligibility for Indian status.”

These policies are discriminatory and have led to the denial of indigeneity based on blood quantum and other arbitrary criteria such as marriage, university education or joined holy orders to the forceful removal of Indigenous children from their families into non-Indigenous homes and residential and day schools.

The result is thousands of Indigenous Peoples being traumatized by not knowing who their families or communities are, making it extremely difficult to reconnect.


Read more:
Stolen identities: What does it mean to be Indigenous? Don’t Call Me Resilient Podcast EP 8

The funding policies of the federal government — whereby resources and service delivery are concentrated to status Indians living on-reserve — serve to create and maintain a scarcity mentality that reinforces colonial approaches to identity and undermines self-governance.

A better solution to the issue of fraudulent claims is to support Indigenous nations and their jurisdiction over identity.

This approach aligns with the UNDRIP and supports the right to self-government. Indigenous nations have been the authority on who they are for thousands of years, it is time their jurisdiction over this be recognized.

Cheryl Simon does not work for, consult, own shares in or receive funding from any company or organization that would benefit from this article, and has disclosed no relevant affiliations beyond their academic appointment.

A heartbreaker against the Thunder – Raptors Reaction Podcast

Justin Champagnie nearly pops the bottle on a win, only for his buzzer beater to come too late

For Anyone seeking employment , Here are some High paying Jobs Opportunities Across Ontario for 2022

Black Toronto Business App: This app will be a game changer for Toronto’s Black Owned Businesses This Holiday Season.

Virtual care still has a place in post-pandemic health care

No Result
View All Result